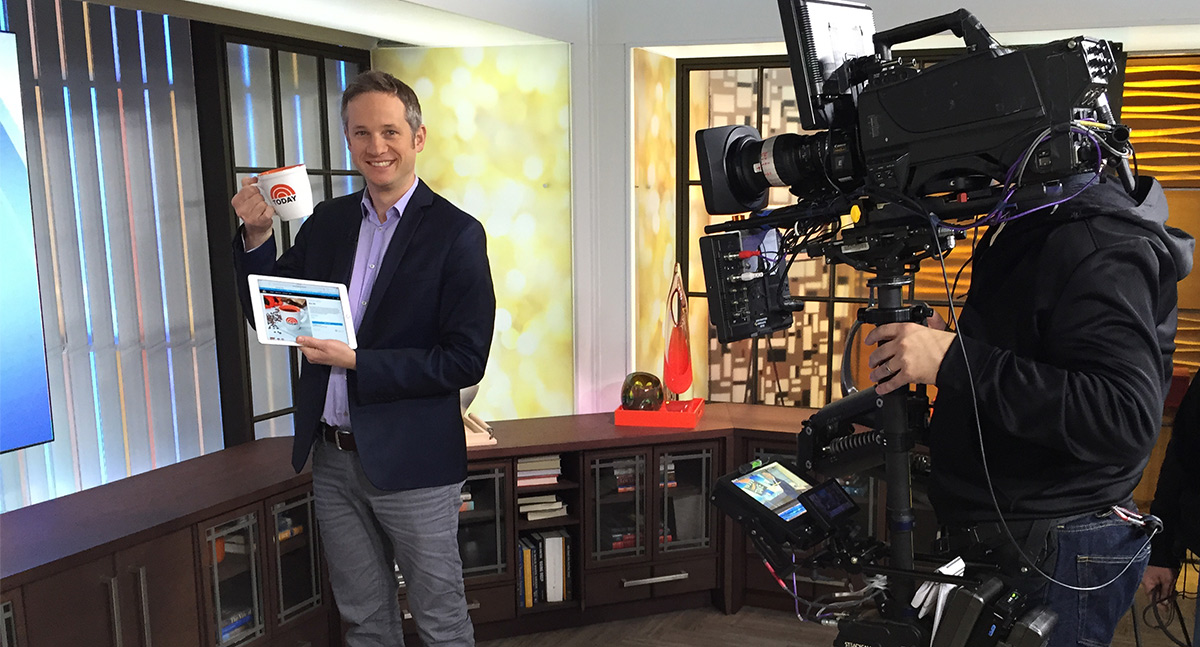 by Thomas Fraps, The Magazine of the Magic Circle

Those who hear the name Simon Pierro immediately start thinking about iPads, iPhones and multimedia magic. His name is a synonym for high-tech magic, and for years it’s been a guarantee that funny pranks and jokes involving a hidden camera are on the way.

Simon knows how to have a good time, and he’s not afraid to make fun of himself. We first met by accident, sitting next to each other on a flight to Cologne. Simon should have changed seats — thanks to my questionable motor skills, I spilled orange juice all over him. On his way to a meeting with TV executives, those were the only pants he had. That didn’t seem to bother him, and we had a delightful time for the rest of the flight. Best of all, Simon’s meeting still went well. Since then, I’ve met him many times, and just to be safe, those meetings don’t include orange juice.

Anyway, when you’re brainstorming, a beer is much more suitable beverage than orange juice — it helps the blood circulation, at least in my brain. But Simon’s brain is always on. It needs to be, because Simon is living online. He’s not only changed that dream, but also his platform. Evolving from the award-winning “dishwasher,” Candid Camera prankster and interactive television star, in the past year he became a YouTube sensation whose original clips reached more than to 10 million people. Simon became iSimon, from dishwasher to YouTube millionaire.

And already, here is my problem. I, a digital dinosaur whose media childhood was limited to a mere five TV channels — when TV stations actually signed off at the end of a broadcast day — how do I write about a digital native? How does an old-school analog magician understand the “http” and “www” world of a permanently online-living multitasking magician?

Douglas Adams made the point many years ago when he mentioned three reactions to technologies. First, all technologies that exist when you’re born feel like a normal, natural part of this world. Second, every technology invented when you’re between the age of 15 and 35 is new, exciting and revolutionary, and you might be familiar enough with them to make a career out of them. Third, every technology invented after you’re 35 is strange, hard to understand, and just feels against the natural order of things.

You probably encountered that phenomenon when you were 15 years old and your desperate parents asked you to program the video recorder. That was 30 years ago. Meanwhile, now I’m 45 and he’s 34. In this digital age, those eleven years might as well be a hundred. Simon explains to me how YouTube, Facebook, Twitter, augmented reality, 3D object mapping and app deployment works. With this knowledge, he’s in an ideal position to make a career out of them. The difference between me and him is that I am consuming but he’s actually producing digital content.

The technical effort is often enormous. You wouldn’t believe it when you see his video clips, but behind that performance are not only original ideas but extensive preparation, detailed plans and a big network of more digital natives. They make the illusions come alive as they erase the borders between reality and virtual reality. I like Simon’s creative approach as he uses technology that incorporates the latest trends, intuitively providing intelligent entertainment. He’s innovative and international. Whether they’re visitors at a software conference in India, participants of an augmented reality event in Hong Kong or a Christmas party of a software startup in Zwickau — his target audience has an emotional connection to Simon and his work, understanding this digital magic much better than I do.

Notebooks, apps, and smartphones are a natural part of our world. These simple windows into the easy-to-understand online world result in virtual astonishment for this generation that’s as effective as the traditional analog tricks of old-school magicians. But for both worlds, the effects must be convincing, and the experiences you’ve had with good old reality can also prepare you for Simon’s new “reality 2.0.”

In his best moments, Simon blends online clips and live performances that straddle the border between magic and technology. It evokes that feeling that science fiction author Arthur C. Clarke predicted in the ’60s — that any technology you don’t understand is indistinguishable from magic.

The competition on this platform is heavy, and just being a great magician is not enough. To design these technological tricks, Simon combines an intimate understanding of the mechanisms of magic with his ability to generate digital content, and that’s differentiated him from all others, lifting him above them all.

The art of magic is one more part of the online world that I might not completely emotionally understand, but that might be due to the rules of Douglas Adams. Nonetheless, working with multitasking magician Simon is great fun, blurring the border between the digital and analog worlds while fighting against my digital dementia. To be honest, it’s quite infectious.

So this iSimon better get ready, because secretly I’m working on my orange juice app.

About the author: Thomas Fraps struggled with reality for the first 27 years of his life, but finally won. Since then he’s been entertaining audiences worldwide as a professional magician, false expert and grown-up. If he’s not on a stage performing, he’s organizing magic festivals in his hometown of Munich, lecturing and writing about magic or occasionally collaborating with brain scientists to learn about the magical mix of dopamine and Merlin.