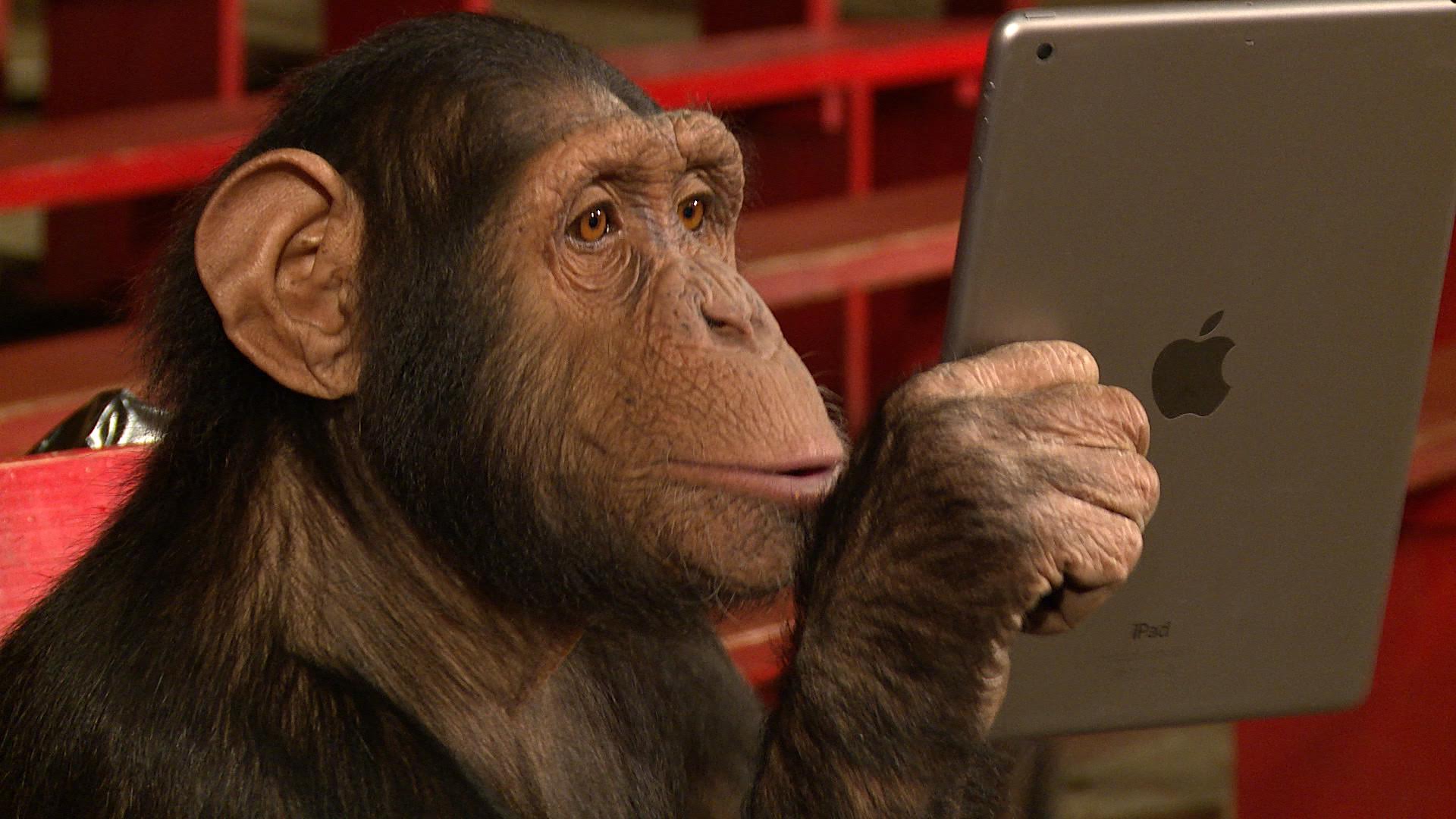 To celebrate the Chinese Year of the Monkey which started Monday (Feb. 8, 2016), what better audience for my iPad magic than the monkeys’ close relatives, chimpanzees (which, like us, are not monkeys but Great Apes)? I had a sensational time with three young chimpanzees, showing them some of my iPad magic tricks.

I’ve been performing my iPad magic in live situations to thousands people all over the world, and they all react differently depending on their backgrounds and personalities. After experiencing the vast range of human reactions to iPad magic, I thought it would be fun to try it out on a non-human audience.

To create this video, I worked with three different chimps: Mona, Jenny and Andy. I was intrigued with their distinct personalities. Mona was shy and introspective, Jenny was self-confident and focused, and Andy was the most rambunctious of the trio, running around and jumping on the shoulders of my videographer.

I decided to tell little story with my iPad routine with the chimps, finding a peanut on the iPad that I take out, and then making it disappear. My little friends enthusiastically took the bait, chasing those peanuts like Scrat from Ice Age, and looking at me with wonder and enthusiasm as the treats magically appeared.

I couldn’t wait to try my iPad tricks with the smart little primates. Would they drop the delicate device? Would I need a chimp-proof case? Would they like my tricks? What would they think of my iPad magic? Watch this video we made of my encounter, and you’ll probably agree that it was a fun way to celebrate the Chinese New Year!

As you can see, my uneasy feeling that my iPad might take a beating in the hands of these exuberant apes were unfounded, because my new friends treated the device as if they’d been using it for years. They gracefully held it with their feet while using their hands to touch the iPad screen. Their elegant, well-coordinated handling of my iPad was a fascinating experience for me — and for them as well.

Of course, I’m not the first magician to venture into the world of chimpanzees. I’ve always been inspired by the legendary Paul Daniels and his hilarious magic performances with the surprisingly sophisticated primates. The first time I saw Daniels working with chimps, I was astonished at their cute reactions and native intelligence. They’re remarkable:

By the Way, One More Monkey

Primates are almost human! The chimps reminded me of the orangutan in this clip — orangutans also love magic, as you can see in this clip recently posted on YouTube:

I’d like to thank the wonderful animal trainers at Schwabenpark for their help with this video.